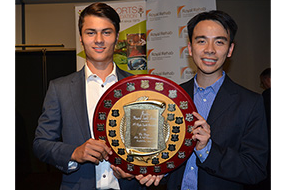 The gun 17 year old forward, who helped the Panthers capture the Sydney Premier League first grade hockey premiership last season, is tipped to represent Australia at the Junior Hockey World Cup U/21 championships to be staged in India from December 1-11.

His goal scoring prowess and athleticism on the hockey field has come under the scrutiny of national selectors, who were quick to name the Ryde sharpshooter in the NSW Futures squad.

Brand turned in skilful performances for Australia in the Junior World Cup qualifying series against New Zealand on the Gold Coast where he netted crucial goals in a victory clean-sweep.

Winkcup, who is the reigning Oceania Junior 3000m steeplechase and 1500m champion, will represent Australia at the World IAAF U/20 Athletics Championships in Poland during July. TWT on-the-spot PHOTO.