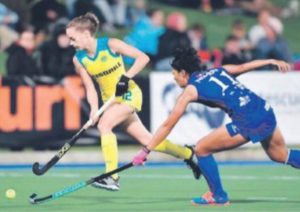 Ryde-Hunters Hill’s dynamic midfielder Mikaela Patterson in action for the Hockeyroos against Japan.

Boom Ryde-Hunters Hill midfielder Patterson made her senior international debut for the Australian Hockey Team in a test series against Japan in Adelaide last September; 13 year old McShane represented NSW City in the annual bowls challenge again Country while talented athlete Leon stamped himself an endurance runner of the highest calibre after collecting a swag of medals at State and National Championships this season.

All three will be recognised for their achievements at a Presentation Evening on Friday November 9 2018 at Gladesville Sporties Club at 6:00 pm.

Mikaela Patterson is one of the most exciting attacking midfielders on the national hockey scene and a fine ambassador for the famous Ryde-Hunters Hill Panthers Hockey Club.

22 year old Mikaela earned her international spurs last season when she made her debut for the Hockeyroos against Japan in Adelaide followed by a Four Nations tournament in the island nation.

A dynamo on the field, Patterson demonstrated her poise and skills against more seasoned opponents to push her claims for a regular spot.
The Panthers’ Senior Club Captain has now chalked up seven appearances for the Hockeyroos over the past twelve months and is currently on tour with the Australia A team in China.

It has been a rewarding period for the Panthers product who was earmarked for higher honours from an early age—representing NSW at school and junior level and figuring prominently in national championship winning teams and being named in the Hockey Australia Futures squad.

Mikaela was involved in the Australian junior hockey set-up for four years, playing a key role in the Australian Jillaroos side that claimed a bronze medal at the Women’s U/21 World Cup in Santiago, Chile, during 2016.

She was also a key member of the NSW Arrows team that captured the Women’s Australian Hockey League title with an epic 7-6 victory over Queensland Scorchers last month.

But while realising her dream of playing for the Hockeyroos, one of Mikaela’s proudest achievements was helping Ryde-Hunters Hill clinch an historic Sydney Women’s Hockey Metro League 1 premiership last season.

Young Mikaela showed her class as she sparked the attack with her precision passing and elusive running to engineer a rousing triumph and stamp the Pantherettes as local heroes.

Promising lawn bowler JACK MCSHANE has a rosy future in the sport, if recent achievements are any guide.

Capable Jack showed a maturity that far belies his years when he won the Club’s Minor Singles title at the age of 11—then followed it up by claiming the Major Singles Championship in 2017.

A testimony of his natural ability is the fact that hot shot Jack has played in Denistone Sports Club’s top pennant team for the past three years.

Under the guidance of leading coach Mark Barton and mentors Bill Sutcliffe and Ted Lean—two Denistone bowls legends who run the Zone 10 Junior Academy—young McShane has developed into one of the State’s brightest prospects.

Barton, Sutcliffe and Lean have been huge influences on Jack’s bowling career at club and Zone 10 level, honing his skills from the moment he took up the game as a three year old.

Jack was introduced to the sport when he tagged along to the greens with his mother Kathy and father Andrew—a Denistone bowls stalwart—with a small set of carpet bowls.

With the help of bowler Peter Turner, he delivered his first bowl as a bright eyed toddler!

By the age of 11, Jack had won the Zone 10 Bowling Association Rookie Singles Championship; the Club’s Minor Singles title and forced his way into the top Pennant team.

His potential was confirmed in 2018 when he was skipper of the Club’s Open Fours championship-winning side and finished runner-up in the NSW State Junior Pairs Championship with Luca Houze and the Zone 10 Open Fours.

Jack aspires to one day represent Australia at school, junior and senior level and follow in the steps of Australia’s former world junior bowls champion Aaron Wilson and don the green and gold at the Commonwealth Games.

At the age of 14 and under the tutelage of master coach Ross Forster, young Jacob has left his mark on the track with record breaking performances to earn a spot in NSW Junior Athletics teams.

Over the past twelve months the determined Leon has sliced 12 seconds off his 800m; five seconds off his 1500m and 13 seconds off his 3000m times to prove himself a calm young athlete and superb first leg runner for both track and cross country relays.

He took up athletics at the age of 12 and just like his father—former Ryde middle distance runner Carl Leon—was an instant success, winning the Sydney North Region Boys 800m.

Jacob won silver in the NSW CHS 800m and followed that up with a fifth place in the 13yrs 800m on debut at the NSW All Schools Carnival—achieving a national qualifying time.

Last November Jacob spearheaded the U/14 Boys 4 x 1500m team to a silver medal at the Athletics NSW State Relays and again handed off the team a brilliant start the next day in the 4 x 800m where they brought home a bronze.

Earlier this year Jacob took on the double of 3000m and 800m at the NSW Junior Track and Field Championships—clocking a time of 9m 33.39s in the 3000m to secure bronze which was almost 27 seconds under the national qualifying mark.

In the 800m, Jacob’s time of 2 min 06.78s earned him another bronze and a second qualifying event and spot on the NSW team for the Australian Junior Championships which was a remarkable feat for his first season.

Jacob won gold in the 1500m and 3000m, qualifying him for the NSW Little Athletics State Championships for all three events.

He sealed his credentials as a team player when he helped Ryde’s U/16 Boys x 3000m team win bronze at the NSW Cross Country Relay Championships.

The versatile Concord High School student is also a talented boxer and a promising centre-back with Parramatta-Melita Eagles in the National Premier Soccer League.

After stints with Concord Juniors and Inter Lions, the gifted Leon was a standout in this year’s U/14 competition.

Mikaela, Jack and Jacob will receive their $1,000 awards at the sports Star of the Year Gala Dinner at Ryde Eastwood Leagues Club on 3 May 2019.