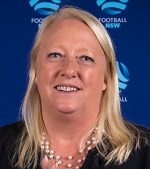 Known to many as one of the most passionate and hardworking grassroots administrators and volunteers in the North West Sydney Football association area, Karen juggles not only her football duties but is also the President of the Eastwood Ryde Netball Association.

For decades, Karen has promoted various sports especially football to the masses within her football mad area.

As an advocate for sport in general, Karen practices what she preaches having played netball for 53 years and football for 18 years for her beloved Rovers.